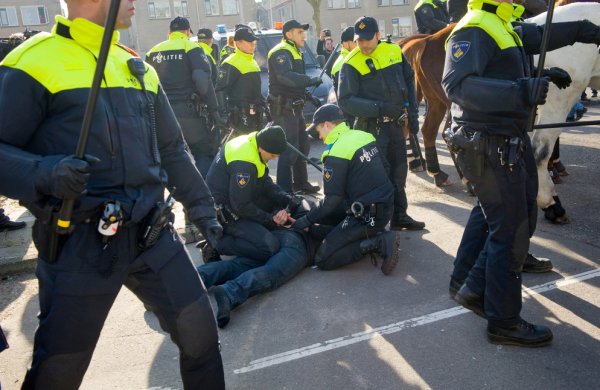 The rioters set fires, destroyed bus stops, and set off heavy fireworks, according to the Dutch news agency ANP.

This was the third night of unrest in the Netherlands.

The violence initially erupted in Rotterdam on Friday night after a protest against coronavirus restrictions spiraled out of control, leading to street clashes and causing police to shoot at the crowd.

Four people were taken to the hospital with gunshot wounds.

Police and regional media reported attacks late yesterday from Enschede in the eastern part of the country near the German border and from Groningen, among other protests.

Dozens of young people gathered in city centers and attacked police with torches. A state of emergency was issued in both cities and a mobile police unit intervened. Several arrests have been reported.

In Groningen, police evacuated the city center after acts of violence. A shop window was smashed in the city.

According to police reports, there were riots in Tilburg and Roosendaal in the south of the country, and there were reports of arrests.