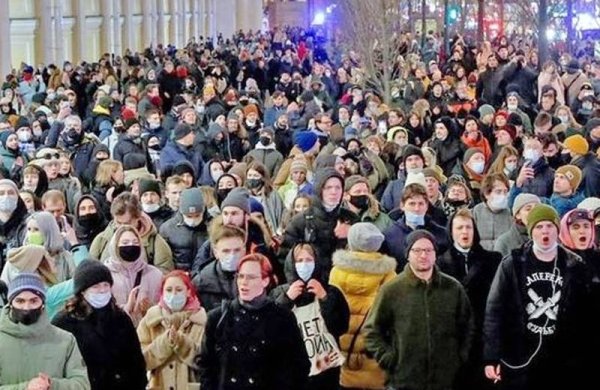 While the international public reacted to the Russian leader Putin’s directing the armies to Ukraine the previous day, his own citizens also stood up…thousands of people took to the streets to react to Putin, While demonstrations were held in 51 different cities yesterday, approximately 1400 demonstrators were detained by the Russian police and security forces, according to the first determinations.

Following Russian President Vladimir Putin’s attack on Ukraine, the US and NATO, as well as the countries in the region, issued harsh condemnations. While Putin did not back down in the face of international condemnation and sanctions, his own citizens began to turn against him in the aftermath of these events.

Thousands of people took to the streets to react to Putin

Big and small demonstrations were held in 51 different cities of the country last night… Especially in Moscow and St. Petersburg Thousands of demonstrators gathered in many cities, calling for peace to Putin.

The Russian security forces, on the other hand, reacted violently to the demonstrators. More than 1391 persons were held in 51 Russian towns last night, according to reports. More than 700 individuals were detained in Moscow, the country’s capital, while St. Petersburg, the country’s second-largest city, was also detained. 340 people were detained in St. Petersburg, according to reports. Thousands of people took to the streets to react.

Opposition and peace supporters in Russia have begun signature efforts to maintain peace after the government and Putin, who has ruled the country with an iron fist for years, were forced to flee the country or be imprisoned. More than 250 journalists around the country signed an open letter calling for the occupation to end.

An open letter, including about 250 scientists, created a big agenda.

In Russia, which has restricted public protests to very difficult conditions in recent years, the demonstrators tried to end the war between the two countries by shouting anti-Putin slogans.